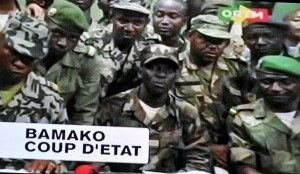 Photo of a TV screen taken on March 22, 2012 shows a group of soldiers announcing a curfew in Bamako starting from March 22 following a military coup. The putschists, calling themselves the National Committee for the Establishment of Democracy, said they had acted due to government’s “inability” to put down a Tuareg-led insurrection in the north and tackle terrorism. AFP PHOTO / ISSOUF SANOGO